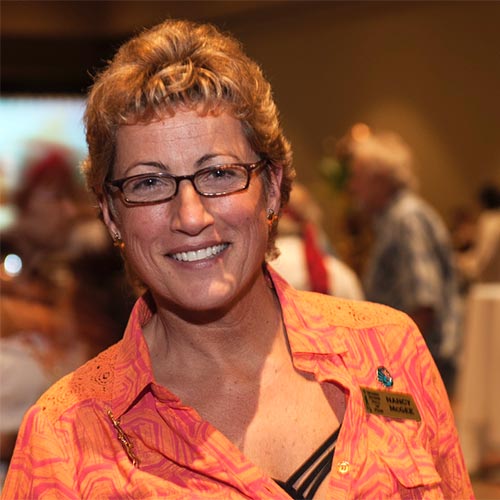 The Texas Chapter of the Explorer Club is extremely fortunate to have Nancy McGee as the new Chair beginning 2020. Without debate, her previous term as Vice-Chair and Program Director was beyond stellar and not to equaled, perhaps ever. Nancy McGee is a fabulous public speaker, leader with vision, effective manager and complete pleasure to work with and know. This chapter is headed to new heights under her capable leadership.

At the age of three, Nancy broke away from her mother coming out of the dressing room at the Banff Springs pool, ran and jumped into the pool, went to the bottom, came up and yelled “Look, Mom, I’m swimming”. That was the beginning of a more than 40-year swimming and diving career that took Nancy to diving off six continents in pursuit of unspoiled ecosystems and a myriad of marine animals.

In 2000, Nancy began a seven-year partnership with Stan Waterman, five-time Emmy-award winning filmmaker. She managed Stan Waterman Productions, organized exotic dive travel, and assisted in the filming and post-production of documentaries. Nancy’s efforts preserved a number of Mr. Waterman’s vintage films, which documented the early days of recreational scuba diving and created a baseline for the study of coral reefs.

Nancy Expedition Photos and Friends (Well worth the time).

Nancy films and conducts tours in many of the world’s most exotic locations; some so remote the local natives have never before seen Western people. For her efforts as an explorer, Nancy was recently named as a Fellow in the esteemed Explorers Club for contributing to scientific knowledge in the field of geographical exploration. She produces, edits and films her own documentaries, each with a unique historical spin on culture and the marine ecosystem. Nancy’s credits include work for NBC, Universal Studios, and Discovery. She has written for a variety of dive journals and publications.

Nancy is a frequent presenter to schools, clubs, and community service groups. She is a featured speaker and emcee for national and international dive shows and film festivals. Nancy is a member of the Ocean Artists Society, Platinum Pro 5000, and a 2008 inductee into the Women Divers’ Hall of Fame.